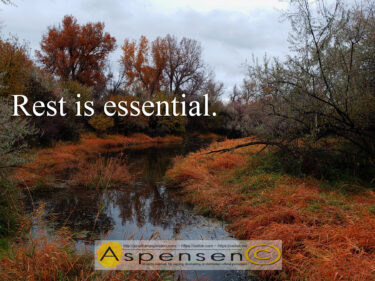 The most important message I picked up from today’s readings overall is that rest isn’t optional. Rest is actually a part of the creative process. I have a tendency to work until I drop. That’s not what we’re supposed to do.

My primary takeaway from each of the passages was this:

God rested on the seventh day. I could take a lesson from that.

Also, God created us–male and female–in his image or likeness* (see footnote, below). I got an impression, while reading that passage, of character traits rather than physical appearance. God is our Creator. He created us to be creators, also. As an artist and a writer, that fills me with a sense of purpose. My mind goes to the parable of the talents. What are my creative gifts? How am I giving them to the world? And how do those gifts from God, given back to the world through me, honor God and the life he gave me? How do they intrinsically acknowledge that all creative gifts derive from God’s creative power, not from ourselves? We are conduits for creative energy, not gods ourselves.

That’s what I got out of it. What did you get out of the readings today?

You can join the discussion in the comments, below; or you can join us in our private Facebook group that I set up specifically for sharing what we take-away from the readings each day.

If you haven’t gotten the FREE “Read the Bible in a Year” worksheet yet, you can download it here. It is not necessary for you to start on January 1st–you can start from the beginning on whatever date you get the worksheet. Join us!

Learn more about why I read the Bible all the way through every year, and feel free to share with anyone you think could benefit.

This post is part of the series, “Read the Bible in a Year.”

* This is the language from the passage. Do I think God is male? Yes. No. Maybe. I think we ascribe gender to God in a way that makes God in our image, rather than remembering that we were created in God’s image. Sometimes I refer to God as he; sometimes as she; sometimes as Ganesh. Ganesh is a Hindu representation of God which is both male and female. Ganesh has the genitals of a man, the breasts of a woman, and the head of an elephant. Ganesh is the remover of obstacles. I suppose I could refer to God as they/them, too. After all, in Christianity we see God as a triune being, so them fits perfectly.

Divisions of gender are ways in which we diminish the Creator to such a small size that he/she/they fits inside our own limitations. And if you’re a Christian, thinking it’s blasphemous to compare God to a Hindu representation (Ganesh), I will suggest that you have missed the point of Ganesh–he removes obstacles between differing entrenched belief systems, too. Do I believe that God is a he-she with an elephant head? No. But I also don’t believe he’s an old white man with a long white beard, either. We should be careful that we don’t confuse the symbols of our faith with the objects of our faith. The objects are intangible. The symbols were created by us as references of convenience. When we hold on too tightly to our human-derived symbols we lose the part that is most important.