This post is part of the series, “Read the Bible in a Year.” 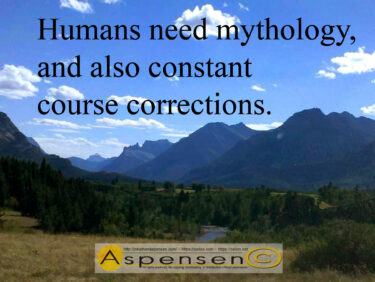 The most important message I picked up from today’s readings overall is that humans need mythology, and constant course corrections.

My primary takeaway from each of the passages was this:

2) The hubris of humankind resulting from that misplacement of faith from God into our own greatness caused God to want to wipe the slate clean. In doing so, he once again made it the responsibility of humankind to protect and preserve all of the other living species on the planet. Our primary role on God’s earth is the responsible stewardship of all living things and to be good neighbors, not only to the other humans, but to all of God’s creation.

That’s what I got out of it. What did you get out of the readings today?

You can join the discussion in the comments, below; or you can join us in our private Facebook group that I set up specifically for sharing what we take-away from the readings each day.

If you haven’t gotten the FREE “Read the Bible in a Year” worksheet yet, you can download it here. It is not necessary for you to start on January 1st–you can start from the beginning on whatever date you get the worksheet. Join us!

Learn more about why I read the Bible all the way through every year, and feel free to share with anyone you think could benefit.

* When I say “mythology,” I’m not using it in the way a lot of Christians do, so as to mean “other peoples’ religion” in a diminishing way. I’m using the term mythology the way Joseph Campbell does: as a way to describe the cosmos to ourselves such that we understand our place in it. Mythology is an organizational literary device that helps us explain ourselves to ourselves.