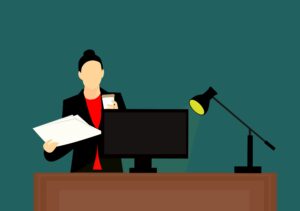 I shared this article on Facebook this morning, because it’s a topic that is near and dear to my heart at the age of fifty-five.  I immediately racked up  several comments in response to this post rationalizing “OK Boomer” as “not that big a deal,” or defending the entire millennial generation from a perceived attack on the entire millennial generation (it isn’t–it’s about a specific form of disrespect and age discrimination).

Ageism and age discrimination is such an enormous problem–perhaps now more than ever before–that I wrote an academic paper about it a few years ago. That paper has been read in over 35 countries and used as reading material in university CRT and Women’s Studies classes around the world, multiple times. I even had a professor from California call me and ask if it would be OK for her students to email me with questions about it for her “CRT and Feminism” class because it is such a huge problem, especially for women. Men experience age discrimination, too. However, they experience it far less than women, according to multitudes of studies. (Google it.)
If you are dismissing this as a non-issue you are misguided and therefore part of the problem. Everyone should be taking it seriously. Quite frankly, I am disturbed that this has been so quickly dismissed by so many people, especially since it is a clear violation of the laws against age discrimination.
Additionally, for those who think that millennials are equally as marginalized by dismissive remarks: It may be rude and inappropriate to make such dismissive remarks, but youth has never been a disadvantage in the workplace or anywhere else. However, ageism and age discrimination in the latter half of the 20th century, and now in the early 21st century, are enormous problems for people as young as forty, and worse for those who are older.
To be clear, no one should be making rude, dismissive remarks to millennials, nor broad generalized remarks that demean their entire generation, either. But it’s not age discrimination, because it does not affect their employability nor their upward mobility on the job. Youth is not a handicap in American society; on the contrary. In a society that worships youth, millennials do not need any added advantage in the work place in the area covered by this article and laws against age discrimination. But that doesn’t mean that it’s okay to malign or dismiss them, either.
However, anyone over forty is at an exponentially increased risk for falling victim to age discrimination, and that’s backed up by solid research and hard data. Phrases like “OK Boomer” are both a symptom of and contributor to the problem.
Please follow and like us:

I’m so glad you are here! My mission is to inspire others and loan them some of my hard-earned courage while they are struggling and trying so hard to build some of their own. I’ve racked up a lot of life experiences and I’ve learned a lot of things in the process. I balance that learning process by playing hard with my husband on our many travels, making memories that we love to share with others. I invite you to join me and we’ll make some memories together, too. ~With gratitude, Ceilon Aspensen

As an Amazon Associate I earn from qualifying purchases.

Disclaimer: While I have a lot of education and experience in a lot of things, and am well read, conversant, and knowledgable on many topics, I am not a licensed professional counselor, doctor, lawyer, accountant, exercise physiologist, or nutritionist. You can look over my CV/Résumé to see exactly what education, training, and professional experience I possess. You can look at my online library to get an idea of all of the books I’ve read (although the list in my online library is nowhere near complete–I have likely forgotten reading more books than I’ve actually read). But you should know that the only academic degrees I possess are a BFA in Studio Art, a MA in Native American Studies, A PhD in American Studies (ABD), and professional licensures/certificates in TEFL-TESOL (teaching English as a foreign language), K-12 Art Education, and Cosmetology, the latter of which are both from the state of Montana, the former of which is an international certification. All of that to say what I used to tell my girlfriends who poured their hearts out to me in the beauty salon over career dissatisfaction, marital heartbreaks, BFF fights, etc.: take any advice or suggestions I give you with a grain of salt, know the limitations of my areas of expertise, and consult an actual qualified professional before you make any life-changing decisions.