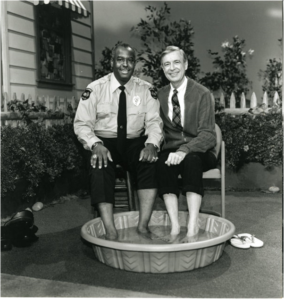 I wish I had been able to play Mr. Rogers’ Neighborhood for my daughter when she was a pre-schooler, but since I had to work and she was always at daycare during the show I was unable to do it. I wasn’t able to watch it myself,  even though it aired in 1968, because my Mom wasn’t into educational programming or  wasn’t aware of PBS, so I didn’t know about Mr. Rogers until I was in college.

As a teacher, I review a lot of educational programming. Mr. Rogers is hands-down the BEST that there is; better than Sesame Street, and Sesame Street’s pretty darned good.

But if I had been able to watch, and let my daughter watch, Mr. Rogers’ Neighborhood, both of us might have had better emotional skills and equipment for dealing with 1) all the trauma from my own childhood that interfered with me being the best possible parent, and 2) all the trauma in her childhood resulting from that, as well as us living with an alcoholic before I was able to recognize that’s what was happening, and the resulting devastating wake left by that broken marriage.

But you don’t have to be traumatized to get the most out of Mr. Rogers! He was simply brilliant at communicating with children, and helping them find their voice and ways to express themselves in a healthy way.

Do yourself and your children (and grandchildren) a favor and watch Mr. Rogers. It’s simply the best children’s programming ever created.

You can learn more about Mr. Rogers and his unique way of speaking to children by reading this article: Mr. Rogers Had a Simple Set of Rules for Talking to Children